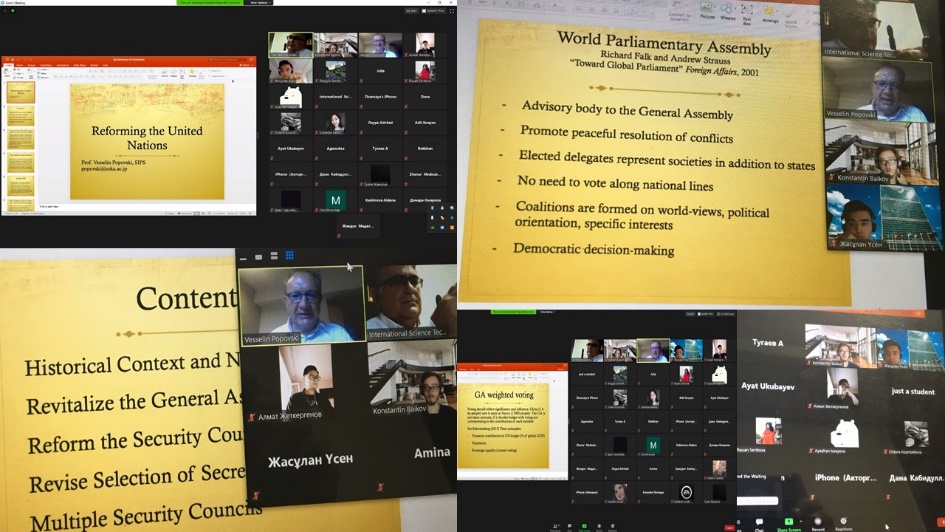 Thirty-three undergraduate students and six faculty members from the ENU Department on International Affairs convened on 16 June for an on-line lecture and discussion on the reform of the United Nations. The guest lecturer – Dr.Vesselin Popovski, an internationally renowned expert on UN reform matters – made a historical overview of the establishment of the UN’s main organs in 1945, the procedures for selecting Secretary General and the several attempts to reform the UN’s General Assembly and Security Council in the 1990s and 2000s.

Dr. Popovski highlighted the longstanding strong opposition by the five permanent members of the UN Security Council to allow for its broader reform. He discussed his own proposal to overcome this opposition by establishing a more representative membership in the Security Council by inviting regional organizations (such as EU, ASEAN, AU) and emerging powers from all continents in a transitional “eight plus eight plus eight” formula that ensures the balance of interests of the old permanent members and the aspirations of the new temporary permanent members. Dr. Popovski’, who as writer, contributor and editor, authors over 20 peer-reviewed publications on the UN reform and global governance, was pleased to answer several questions that focused on the role and positions of the UK, Japan, and Russia vis-à-vis the reform agenda. He also addressed a comment whether the United Nations are immune from the unfortunate plight of the League of Nations in the 1930s and answered queries about the prospect for predominantly Muslim countries to become members of the Security Council. In addition, Dr.Poposvki discussed his proposal for the establishment of a system of Multiple Security Councils where new permanent members will assume membership according to their priorities and contribution to the global challenges. These new Security Councils would include a Climate Change Security Council, a Health Security Council and a Peacebuilding Security Council. The questions were formulated mostly by ENU undergraduate students currently on summer internship with the International Science and Technology Center where – under the supervision of Dr. Kamen Velichkov – they learn about the governance of various international organisations. On behalf of the Department on International Affairs and the Friends of Europe Club under the ENU’s Jean Monnet Chair on European Diplomacy, Dr.Dana Akhmedyanova,the Head of the Department, thanked Dr.Poposvski for his talk and for sharing with his audience his presentation and upcoming publication on the UN reform. Professor Dr.ZhanarMedeubayeva, Lead expert of the Jean Monnet Chair, and other faculty members also attended the event.

Dr. Popovski, currently Professor in International Peace Studies at Soka University, Tokyo, holds a PhD from King’s College London, M.Sc. from London School of Economics, and B.A./M.A. from Moscow State Institute of International Affairs. He was Expert Member of the Commission on Global Security, Justice and Governance (2015-2018) and Together First: UN at 75 (2019-2020). In the past he contributed to two major global initiatives: the International Commission on Intervention and State Sovereignty (ICISS) and its Report ‘Responsibility to Protect’ (2001), and Princeton Project on Universal Jurisdiction and its ‘Princeton Principles of Universal Jurisdiction’ (2001).

The International Science and Technology Centeris for the first time a host of summer student interns from the ENU. The eight current interns will proceed with another week of on-line knowledge sharing sessions on science diplomacy and public diplomacy.